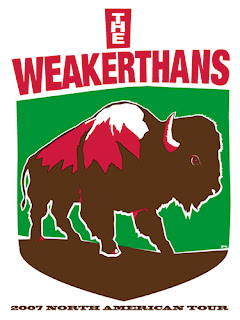 I talked about canada quite a bit the other day in real life. So there- an excuse to blog about their music scene. I'm also going to put pictures in this to make it look prettier.

The picture is of a bison, I saw a couple at the zoo, they're huge. I've also eaten a few at the tavern on south pembina, they taste amazing...

The guess who- American woman
Apparently the most famous band out of winnipeg, my ex served the lead singer at a salisbury house once, he also has a theatre named after him. This song is much covered and pretty cool, I also wrote a rap about salisbury house once-

I didn't wanna be rude but i was in a grumpy mood
Kicked the door on some dude taking a crap?
"please excuse me if i intrude I'mowna sit on your lap!"

Salisbury fucking rips shit down
I went in one morning and was served by a clown
Busted some moves outside on the grass
Busted a cap in the waitresses ass!

Salisbury house burns shit sideways
I swear their milkshakes could turn will smith gay
Waitress wants a tip but, when I pay?
I give her 3.50 and 19cents on layaway

Salisbury house puts shit under
All of my efforts to resist go asunder
The waiter leaves me gazing, agasp in wonder
As to why I keep rolling over there just like thunder

The way I chow down you'd think I was in china town
But fuck chopsticks I eat it up with a spoon cos it's round
Go in there on a tuesday with dan, kyle or cory
Like when I was locked in the closet, in my full naked glory

If it's morning i get pancakes if it's evening i get pie
I clean my plate and leave but before that i say bye
Salisbury house only in manitoba
I even head over there in my friend's range rover
The way they serve it up make the rest move over Makes me feel like Spanish military leader G.F.D Cordoba

That picture is from the 24 hour salisbury house on pembina HWY in the peg, many great milkshakes and nips have been had there after a night out, indeed the second best nights end there...

Metric- Dead Disco
Anyway I'll try and stop waxing lyrical about winnipeg, and also about metric as i've mentioned them alot already in this blog but no introspective on the canadian scene without giving them "blowing them up" as tim westwood will idiocise. Picture wise I thought, I should put a picture of Emily Haines looking sexy then realised that there are no existing pictures of her where she doesnt..

Risen from the ashes of suburbia and highly backed by nme they're from new market, ontario these guy are big advocates of what would probably be the ontarian equivelant of our rough trade label, paper bag records. They've already toured over here and are doing pretty good, i'd definately reccomend checking them out if one hasn't already

Get over the led zep thing and they're good. blow me.

The paperbacks- I haven't listened to these guys but they're from the peg, I trust the person who reccomended them and you can stream the whole album there, i'll be doing it later i reccomend doing the same.

Papermoon- O.k so it's a myspace link bite my fuckin balls for fuck sake.

O.K So it's also St. Patrick's day today, my local pub, well not my local, the nearest pub to me that isn't a shit hole, is having a whole thing all day.