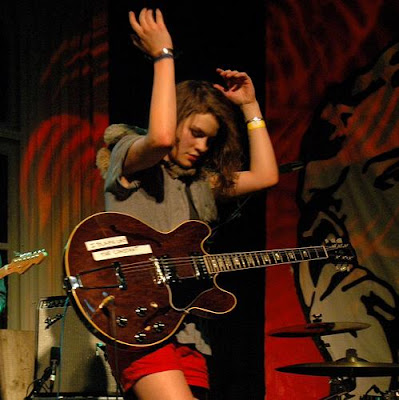 Lily allen is the daughter of an actor. She doesn't want this to be her free ticket to fame blah blah etc...

Lily Allen: Oh my father's famous but I don't want to be famous because of that
World: Uh who's your father?
Lily Allen: Oh just Kieth Allen
World: Uh... oh I don't quite... what band was he in?
Lily Allen: Oh he's a famous actor
World: Um Lily I don't think that really matters if you're a singer there's no reason why it would make a difference.. But yeah that's cool if he's a huge hollywood actor, I guess i'm just not up on the names...
Lily Allen: Kieth Allen he was in lots of movies but ya know w/e i'll be famous just because of me (and my desperate need for attention).

I love Sting. However i've no idea what his surname is, but refreshingly self-aware the satin voiced coco, daughter of the lute enthusiast won't even risk using it for fear of being grouped in the same cess pool as the Lily lites.

I blame Coco's style is such that it's a pleasure for the senses. Laid back, reggae/ska influences, if it was twice the speed the mainstream would be all over this and she's be up for all the brit awards next week. I like to think everything about this project is conscious and self-aware with the aim of filling the perfect niche.

Her title track is gorgeous and symptomatic of her style. Sometimes labelled "how did all these people get in my room" such is the nature of demos, which is all we have right now unfortunately but they are sublime. The track "I blame Coco" with the line "it's late and i'm tired but Jasmine wants to dance" epitomises the carefree love in atmosphere that this exquisitely crafted music attracts, one can only imagine the live shows are a sight to behold.

I blame coco
Never be
Ceaser ft. Robyn
Bohemian Love
Control
2B 2D or not 2B
Posted by Outroversion at Monday, February 08, 2010