I heard about babygravy through my random blog searchings, while looking at oxford artists for I think their scene has a lot going on right now. I checked whether they were playing and not only were they this saturday but had organised an audacious evening of music at the academy single handedly. Impressive. Ambitious. The way forward for sure.

I was kind of in two minds whether to go like money wise, as I have a lot of gigs and festivals coming up not to mention blur and oasis at the start of next month. But I left a post on their last.fm and they kindly offered to put me on the guest list so I resolved to tell work i'd be finishing an hour early on saturday (and to SMahB's) and head over to cowley road, the epicentre of indie oxford. 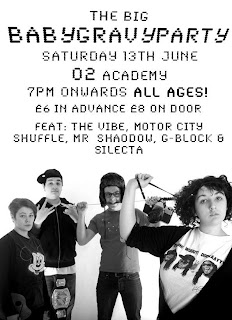 So I was going into this in a pretty good mood, the band are clearly nice people and have put in a hell of a lot of ground work to make this happen. In particular the drummer, zahra who set me up on the guest list and is pretty easy to get hold of if you want to book babygravy or they seem they'd be happy to chat with you if you were having a bad day! But i'm getting ahead of myself for their are many acts to be seen before I can even begin to pass comment on babygravy's live show...

I don't know if it's right to call him the compere for the evening but if I were about to then i'd say he was a fine compere. Seriously though this guy was good, all night. He kicked off rapping ABOUT the evening and I couldn't tell whether it was a song or if he was just saying things, this happened quite a few times, he blended with the beat and rhythm that well and just seemed to have a natural poeticism in his speaking voice.

It all started off with unbeatable energy, helped in a large part to the group of like 3 or 4 dozen highschoolers who seemed to have access to a kind of enthusiasm us indielites could only dream of! But if this level of energy continued and infected the whole place then this was going to be a great night...

Now here's some guys wearing the same genre of shirt as me! After silecta left the stage it seemed like there was going to be a fairly short turn around and it turned out ot be sensationally quick. So far everything was seeming to be worked out to perfection.

They went straight into a high temp number which of course cued moshing, certainly think a slow song wouldn't have gone down too well it was catchy stuff though. Noticed more and more people filtering in as these guys proceeded. There was one track in particular that had really impressive lyrics, sort of from the semantic field of literature and writing. I'd imagine if I was sitting in a library and wanted to write this it wouldn't come out nearly as coherant. "I need a light" was a great track as was "wednesday". Great songs, both of which you can check out on their myspace.

Seemed to communicate well with the crowd despite not saying much in between songs but during people seemed to really be digging them and rightly so. Mr Brown was another good track. Could pretty much name their whole set list each song was that memorable. Playing a few more oxford dates this summer and i'd expect to see them at truck or indietracks next summer. Problem is they don't, as a few acts don't this evening, have a last.fm and it is kinda essential these days.

Before these guys come out silecta is out again being as charming as ever. Reminding us to hit up the merch stand and also to bag on old people, a favourite pass time of mine of course ;) Crowd seemed insanely excited for what was coming up next...

Starts off with a guy playing acoustic guitar, kinda unclear as to what is about to happen! First track was a little static but two more fellas hit the stage and things started jumping. One of the guys, wearing plaid with a badge, has a great laid back style. He just seemed to be ahead of the beat, I don't mean he was out of time lol I just mean he was controlling it seemed to be one step ahead lyrically. There were... alot of people in this group! So many going off and on stage that it was hard to keep up and I'm sorry I couldn't get everyone's name but credit to-D-Dot-Anger, Rawz, A-Star, OMC, El Capitan,Biscuit, Black Knight, N-Zyme, Precise and Goldline for making this a truly visceral experience and everyone up there seemed to be having a great time which was a pleasure to see.

They also gave out free cd's which is always a cool thing to do but man, the girl in front of me was a MAGNET for these things! First she got hit in the head by one, then she caught one, then another and gave it away, it was all rather impressive ha.

This band was YOUNG. Plus one of them had a guitar that lit up! What do I gotta do here?! Didn't notice until now but it was getting pretty packed. I felt like it would be worth the entrance fee to see what the hell this was gonna be like they are definately THE youngest band i've ever seen. The lead singer poppy, I must say, has incredible composure, leading these four guys well. She can shred and seemed relaxed in the rhythm, was highly impressive. Alfred on the synths was 'kin lovin it and the drummer surprisingly deliberate.

One track called messed up sounded like a proper track, coulda been by tegan and sarah or smoosh. Speaking of which it's hard to really not compare young female leads to smoosh before they mature and certainly resonates here. The last track had proper electro rhythm too they seem to know what they're doing, be interesting to see what comes of them on the oxford scene.

Also during this set I saw a kid shiftily going to buy condoms from the machine and two guys having a little dance off right in front of me! Ha, it was awesome but damn it was just that kinda atmosphere.

Before Mr. Shaodow came on an old guy came onto talk about LMHR. I could tell he was old because he used "do" as a noun ha. Seriously though this is why I like the zodiac room in the academy because it does allow a forum for serious issues without really distracting from the music. This was where I first saw to write love on her arms. Obviously spoke about the recent gig in Stoke and about the BNP and it was good to see all us young folks united in opposition to such oppression. I heard someone say today "evil comes from good people not doing anything" so yeah obviously vote against the BNP.

So, Mr Shaodow. He played truck last year. I definately noticed people feeling this further and further back in the room and was starting to hope by the end of the night the room would be unified in one big fat dance off. They're way too cool alright.

After his first track he introduces this guy as being able to "rap about anything off the top of his head" and to be fair it was amazing! The subjects he was given were "horses, sex and cats" I recorded it on my phone but everything's being videod anyway and I missed out the best line at the end. grr. You gotta wonder though how much preparation you can put into freestyling but I think this guy just prepares by being awesome.

Shaodow though was hella impressive, glad I finally got to see him everyone was feeling it was a great time. Apparently Tim westwood, the big dog, says all us cats should be eating him up too ha though it is right that he's getting the attention his talent deserves. Check out his myspace for "are you stupid".

Kicked off with did it again which stats wise is their most popular track. The singer has a hugely powerful voice and jagged crystalline delivery. Drummer 'kin meant it tonight! Everybody's somebody. Bassist had huge control and worked well with the keyboards. Red eyes, infectious as ever. Not going away again. New track, could be their signiture tune. Bit gossip. Don't touch me ft. mr shaodow was about as sweet as fuck!

They go off but come back for the encore which was "you are where i am" yeah I know I said that the other track could be their sig but i 'kin love this track! It's got four stars on my ipod! Haunting, pumping, awesome.

It was still light outside when it finished but only because summer solstice is next weekend. Great atmosphere in the academy. And this whole straight edge thing is amazing, I go in and have fruit juice and come out even healthier than I went in and of course can truly appreciate the music and remember it all in the morning. Feels like i've been SxE my whole life :)

Driving back my main contemplation was over the organisation of the night and I was thinking if I organised a night like that that would be how I'd dream it would turn out. Of course i'd wake up and go there in the evening and no one would turn up lol but I'm sure babygravy are pleased with themselves. A huge success in my opinion, gives hope to all of us little guys.